FALLING FOR FATE by Caisey Quinn is LIVE!

While second in the Second Chance series, this novel stands alone.

*SURPRISE!! Caisey decided to include a Special Bonus Novella!

Fate Buchanan just wants to escape the constraints of her old life. After checking her mother into rehab and catching her fiancé with her maid of honor the night before their wedding, she ran. Angry and hurt, she’s aching to do something reckless.
Dean Maxwell is having one last summer of freedom before taking over his family’s multi-billion dollar medical conglomerate. When he sees a beautiful woman running down the beach alone after dark, he knows it’s not safe. So he does something impulsive.
When their paths cross unexpectedly after a night of unbridled passion, neither of them can forget the memory of the affair they shared. What began as one night is about to become a whole lot more.*While part of the Second Chance series, this novel is a standalone.
CAISEY’S CASTING PICKS

“God, you’re so beautiful.”
Her eyes widened up at him. She could only imagine how she looked. Hair messy and damp, his shirt sliding off one shoulder, eyes glazed over.
“You are.” He shook his head as if searching for the words to explain his attraction to her. “That first night, swear to everything holy, I thought you might be some mythical creature come to steal my soul. But you were so damn beautiful that I would have given it to you.”
She kept quiet, afraid to move or speak and risk breaking the magic that kept him with her, kept him from running. He wasn’t running. He was opening up and being honest.
Dean lowered himself into the bed beside her, propping on one elbow and facing her. Fate mirrored his position and admired the way the moonlight lit his handsome face.
“I asked the universe for a sign. It sent me you.”
Her whispered confession made him smile. But his expression turned serious far too soon for her liking. “I felt it the moment I saw you. A compulsion like I’d never felt before, as if some unseen force propelled me toward you without my consent. I’ve felt it ever since.”
Fate rested her head on her hands and nodded against them. “I feel it too. I’m just…a little afraid of it. Of what it might cost us.”
“My mom used to say that things worth having didn’t come easy and that the kind of girl that was worth waiting for wouldn’t wait on anyone. Those two adages keep coming back to me every time I think of you.”
She inched her hand over toward his. “Do you do that often? Think of me?”
Dean kept eye contact, only breathing and watching her. “Define often.”
Fate grinned. “More than once a week.”
The slight curve of his lips faded and his gaze became a heavy, tangible thing she could feel pressing into her.
“I thought of you every day, Fate. And I didn’t even know your name. Even after I did… I think after that, it was more like several times a day.”
She wanted to keep this moment, to keep him here with her just like this. Both of them exposed and vulnerable. It was real and honest and—despite her exhaustion— exhilarating. But she knew it wouldn’t last forever. Nothing ever did.
“Sleep with me tonight. Don’t leave. Just… Just sleep with me, please.”
He nodded, letting his fingers interlace with hers between them and placing a soft kiss on the top of her hand. “I’m not going anywhere. Goodnight, sweetheart.”
“Goodnight, Dean.”
*PLAYLIST TRACK: Stay with Me by Sam Smith* 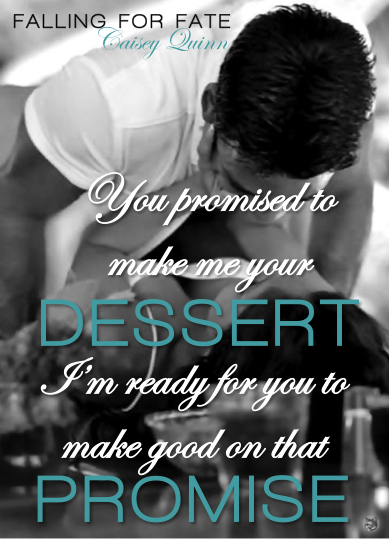 Caisey Quinn lives in Birmingham, Alabama with her husband, daughter, and other assorted animals. She is the bestselling author of the Kylie Ryans series as well as several New Adult Romance novels featuring country girls finding love in unexpected places. You can find her online at www.caiseyquinnwrites.com

Connect with Caisey on Social Media: