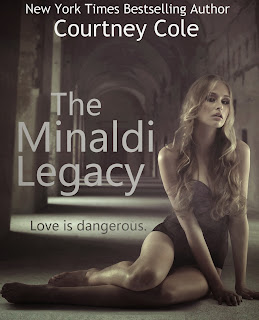 See below for all of the information regarding The Minaldi Legacy Series and Courtney Cole!
ABOUT
The Minaldi Legacy:
“I’m a monster, Eva.  There’s no saving a monster.  But I love that you want to try.”
Luca Minaldi is rich, powerful and mesmerizing. He’s also a reclusive enigma.  He
lives in Malta, a fairy-tale place filled with sunshine and sea, beauty and secrets.  And Luca’s darkest of secrets is the best-kept of them all.
Eva
Talbot comes to Malta to finish her doctoral dissertation in Psychiatry.  When she meets Luca, there is a very real and instant attraction that she has never felt before. But even still, she senses the darkness that lives within him.
In part one of this Romantic Thriller, Of Blood and Bone, Eva is hired to care for Luca’s mother, a woman who suffers from dementia.  It is Luca, however, that Eva will eventually risk everything to save. But by the end of part one, Eva doesn’t know if she can save Luca
without losing herself.
In part two, Of Darkness and Demons, the legacy and curse that plagues Luca continues. Eva and Luca are thrust into a world where their love is tested and darkness reigns.  Amid chaos and treachery, love and hate, Luca and Eva learn one important thing.
Love is dangerous.
But it also might be the one thing that can save them all.
ABOUT COURTNEY COLE:
Courtney Cole is a novelist who would eat mythology for breakfast if she could. She has
a degree in Business, but has since discovered that corporate America is not nearly as fun to live in as fictional worlds. She loves chocolate and roller coasters and hates waiting and rude people.
Courtney lives in quiet suburbia, close to Lake Michigan, with her real-life Prince Charming, her ornery kids (there is a small chance that they get their orneriness from their mother) and a small domestic zoo.
LINKS: