Joshua Miles has spent his early twenties spinning his wheels. Working dead-end jobs and living at home has left him exhausted and uninspired, with little energy to pursue his
passion for graphic art. Until he meets Gemma Henare, a vivacious out-of-towner
from New Zealand. What begins as a one-night stand soon becomes a turning point
for Josh. He can’t get Gemma out of his head, even after she has left for home,
and finds himself throwing caution to the wind for the first time in his life.
It’s not long before Josh is headed to New Zealand with only a backpack, some
cash, and Gemma’s name to go on. But when he finally tracks her down, he finds
his adventure is only just beginning. Equally infatuated, Gemma leads him on a
whirlwind tour across the beautiful country, opening Josh up to life, lust,
love, and all the messy heartache in between. Because, when love drags you
somewhere, it might never let go—even when you know you have to say goodbye.
BUY NOW!
AMAZON    BARNES & NOBLE   iBOOKS“Where Sea Meets Sky combines one-night-stand with coming-of-age to glorious success, one that makes this not just a read, but an experience…Halle’s writing also stands out, poetic and vivid, then starkly honest.”

Karina Halle takes us on another epic adventure… a journey of self-discovery and love, of taking chances and redefining futures…I absolutely loved Halle’s ability to whisk us away and make it seem as if we were in a faraway place…It felt like an adventure.

“A luminous love story fraught with serious angst and impossible odds against the backdrop of a stunningly beautiful location… Where Sea Meets Sky is Karina Halle’s most flawless writing to date.”

“Karina Halle, where have you been all my life?…[the] descriptive writing made the entire book so vivid!…if you’re looking for an insanely sexy book to pick up, grab Where Sea Meets Sky!”

–Once Upon a Twilight

“Emotionally beautiful, inspiring and unforgettable, Karina Halle has yet again touched my heart with her poignant writing and her beautiful stories, and I can’t wait to read Amber’s story coming soon this summer!” 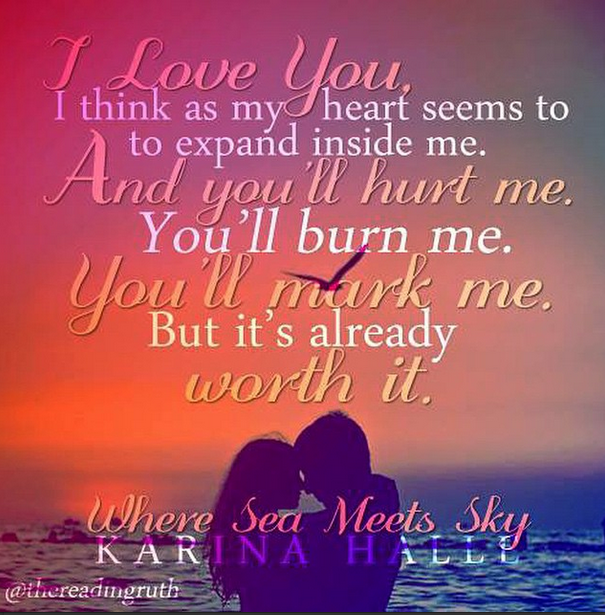 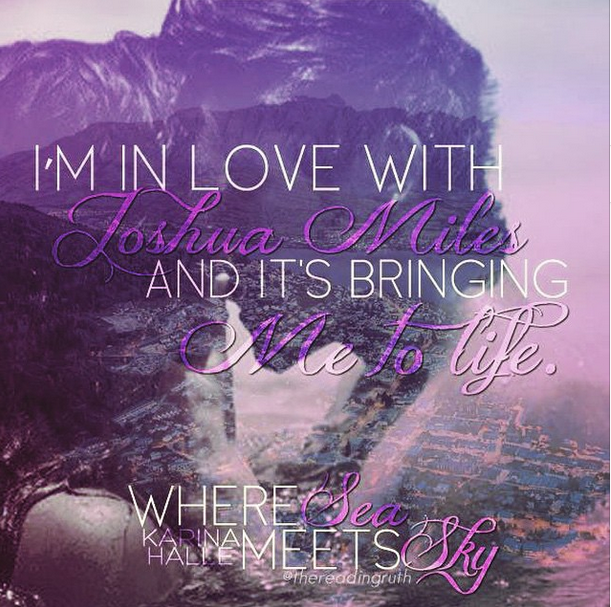 EXCERPT
There’s nothing but me and Gemma. It feels like we’re the only people left in the world. And it scares me, because she’s all I have to hold onto. I can’t be sure she won’t let go.
There’s no official camping at the lighthouse, so Gemma takes the bus off-roading, much like we did yesterday, and we come to a stop in a small valley in the middle of a field of cows. They all swivel their heads to stare at us with dark, inquisitive eyes. There’s a small house up on the hill but we can barely see it. Horses graze on the hill’s terraced grooves.
Beyond the hills, there’s nothing but ocean. I breathe in deep, feeling strangely nervous and shaky. I don’t think it’s just about being on the edge of nothing, though.
I think it’s that I’m on the edge of something.
We go to bed early, our alarms set for the early morning hour, pre-dawn. Even though the ocean looks to be about a ten-minute walk, I pack a bag with my camera, my phone, my sketchbook and the pastels.
I can’t get enough of her. Our love-making is slow and lazy but necessary. Being inside her feels like being home, it feels like being in love, it feels like everything sweet and beautiful and nice in the world. Every time I come in her I hope I’m making a home for myself, a place where I belong.
The alarm on my phone goes off way too early. In my sleepy stupor I nearly turn it off but Gemma is patting my arm, then punching my arm, telling me to get up. The world around us vibrates with the sound of mooing cows and I wonder how the hell I slept through them.
Even though the days are hot, the mornings by the ocean are cold, and I can barely get on my jeans and hoodie in time. Armed with the pack and flashlights, we jump out of the van. The air snaps at us as if we’re wind-blown flags.
Hundreds of cattle spread out in all directions, bound by the green hills to the south and the lighthouse to the north. I look east, to where the hills part and the sky is a paler shade of dawn. It seems to be growing lighter by the second, and our chances of catching the sunrise are dwindling.
We take off toward the light, cautiously creeping under barbed wire fences and avoiding the epic cow pies dotting the land. The cows, for the most part, seem to be ignoring us, but their piles of shit are like hidden landmines in the dim light. A meandering, narrow stream cuts across us and we have to head up into the terraced hills where wary horses eye us. I get the feeling that we’ve chosen the most difficult route to see the sunrise, and from our vantage point I can’t even see the lighthouse anymore.
Just as the sky seems to grow frighteningly light, we reach the crest of the hill and I nearly collapse, out of breath from the quick, steep hike. A lone filly bolts at the sight of us.
Below us lies an empty beach, laid out like a sheet of velvet. Aside from the occasional hoof print and driftwood, it looks totally undisturbed, like it has been waiting for us all this time. The South Pacific is spread out at the horizon’s feet, a royal blue tinged with saffron edges. The sun is not up yet. We still have time.
We run down the hill and I nearly eat shit, several times, my shoes slipping on the dew-slicked grass, until sand sinks beneath my feet. I grab Gemma’s hand and we run over to the water’s edge just as the sun peeks its glowing crown over the wavering line.
I look at her and smile. We made it. We’re standing on the easternmost point in the easternmost habitable country. We might even be the first people on this whole fucking earth to see this fiery sunrise. Only thousands of miles of rolling water lies between us and the southwest coast of Chile.
And yesterday.

Karina Halle is the New York Times bestselling author of Where Sea Meets Sky, The Pact, Love in English, and other wild and romantic reads. A former travel writer and music journalist, she lives on an island off the coast of British Columbia with her husband and her rescue pup, where she drinks a lot of wine, hikes a lot of trails, and devours a lot of books.