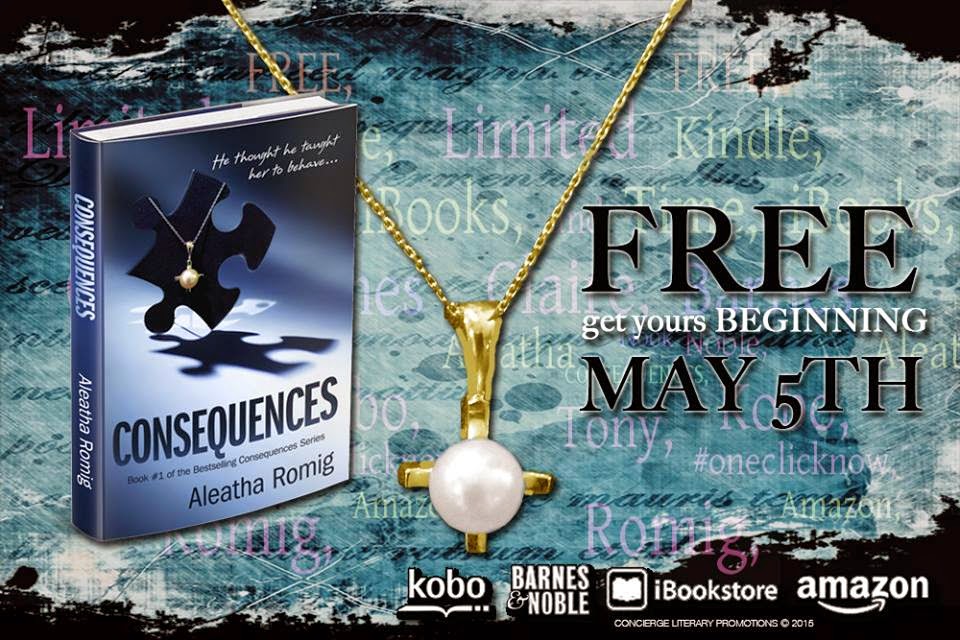 Book #1 of the Bestselling Consequences series:

Every action has consequences.

Waking in an unfamiliar bedroom in a luxurious mansion, Claire Nichols is terrified to discover that a chance encounter led her into the cruel hands of her abductor, Anthony Rawlings. Claire has no understanding of why she’s there, but it’s been made abundantly clear—she is now his acquisition and every action has consequences.

Learn the rules to survive.

Facing incomprehensible circumstances, Claire must learn to survive her new reality—every aspect of her livelihood depends upon the tall, dark-eyed tycoon who is a true master of deception. Driven by unknown demons, he has no tolerance for imperfection, in any aspect of his life, including his recent acquisition. Anthony may appear to the world as a handsome, benevolent businessman, but in reality Claire knows firsthand that he’s a menacing, controlling captor with very strict rules: do as you’re told, public failure is not an option, and appearances are of the utmost importance.

To fit together the pieces of the puzzle, Claire must follow his rules. Will her plan work, or will Anthony become enthralled by Claire’s beauty, resilience, and determination, changing the game forever? If that happens, will either of them survive the consequences?

Nobody ever did or ever will escape the consequences of his choices.—Alfred A. Montaper

Upon opening the door, she wasn’t disappointed, and his presence didn’t startle her. He was seated at the table with the gift in his hand. “You haven’t opened your present.”

“I knew it was from you and thought you might want to see me open it,” she lied.

He set the gift on the table and walked toward her. Although his height dominated her small frame, she held her ground and looked up at him as their bodies touched. He pulled her close and held her there with his strong, solid arms. She knew her emerald eyes appeared weary as he examined her face. His soft brown eyes gleamed while his musky fragrance overwhelmed her senses. She wasn’t afraid, only tired. Silently she prayed: Dear God, if he wants me to do something, I hope it’s over soon.

In one swift yet gentle motion he lifted her and carried her to the bed. Although he had a trip to take, he didn’t seem rushed. Instead, he laid her on the bed and leisurely untied her robe. Claire remained still as he stood and looked at her body—completely nude—pink from the warm bath—and smelling of bath beads. Neither one spoke. There were no instructions, no insults, and no rules. Attempting to conceal his burning carnal desire, Anthony’s fingers moved slowly as his light touch traced over her breasts, down her stomach, and over her hips.

The heat intensified as his touch turned to caresses. She didn’t want to respond. Wanting to remain unfazed by his actions, she reminded herself, this is the man that hurt me; however, when his lips contacted her soft skin, beginning at her neck, nuzzling her collar, and suckling the flesh of her breasts—her body stirred deep inside. Fighting the sensations, she remained stoic until his tongue tenderly teased her nipples and his fingers explored new depths. Unconsciously, she pushed away the absurdity of the situation, as well as the abrasiveness of his five o’clock shadow. Her nipples hardened while her back arched, pushing her breasts upward.

The open drapes filled the room with natural light. As his mouth tantalized her skin, she sat forward allowing him to gently remove her robe. It was then, Anthony gasped.

Claire froze—unsure why he made such a sound, and turned to see his face. His features were softer and more concerned than she’d ever witnessed. He didn’t say a word but tenderly caressed her neck and back. His actions were sensual, careful, and tender.

Slowly, he joined her on the bed, and only after ensuring that she was moist and ready did he enter her body. He’d been there before, but this was different. The only sounds from his mouth were incomprehensible noises that made their meaning clear. Soon, she responded in the same language. This time he wasn’t the only one to experience fulfillment—Claire did too.

After they were both satisfied, she rested on the satin sheets while he walked to the table, completely nude. From her vantage point she saw his muscles defined from exertion, and firm skin glistening with perspiration, as he picked up the gift and turned back toward her. Lifting her head from the pillow, her long damp brown hair cascaded in waves around her face. Anthony handed Claire the gift and watched as she removed the wrapping from the black velvet box. Inside was a Swarovski wristwatch. She smiled.

“It’s meant as a way to avoid glitches in the future,” he said softly.

“Thank you. I would really like to avoid those.”

She handed him the box and lowered her head to the pillow. Completely drained of energy, she closed her eyes and felt the soft warmth as Anthony lifted the covers over her body. She could still smell his musky scent as she drifted into unconsciousness. She didn’t wake until Monday morning.

Aleatha Romig is a New York Times and USA Today bestselling
author who lives in Indiana. She grew up in Mishawaka, graduated from Indiana
University, and is currently living south of Indianapolis. Together with her
high-school sweetheart and husband of twenty-eight years, they’ve raised three
children. Before she became a full-time author, she worked days as a dental
hygienist and spent her nights writing. Now, when she’s not imagining
mind-blowing twists and turns, she likes to spend her time with her family and
friends. Her pastimes include reading and creating heroes/anti-heroes who haunt
your dreams!
NEWSLETTER   WEBSITE    FACEBOOK   AMAZON AUTHOR PAGE   GOODREADS   INSTAGRAM   TWITTER  TSU   PINTEREST
K.A. Tucker’s SURVIVING ICE – Cover Reveal
Under the Influence by L.B. Simmons