Is there anything more scrumptious than forbidden love? 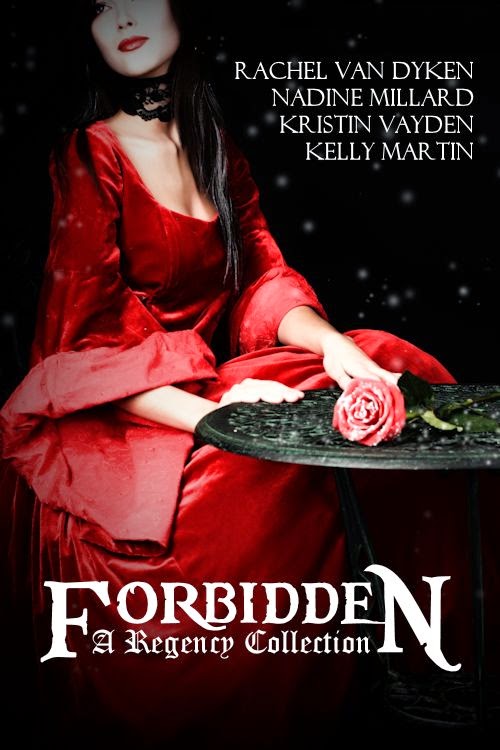 Cloaked in Red: A Shattered Fairy Tale – Kelly Martin
Frederick Dodsworth has no desire to find love at Anthony
Wexley’s Christmas gathering. Yet when he lays his eyes on the beautiful
Rebecca for the first time, he is beyond smitten.
Lust turns to love. Love turns to jealousy. Jealousy turns
to betrayal.
How did Frederick Dodsworth become the most evil man in
Darenset?  Simple. It started with a
kiss.
For the Love of A Lady – Kristin Vayden
Jilted, rejected, unwanted.
Lady Esther Flanguard is all of the above… but that’s all
about to change soon.
Because, Essie has a plan. And it’s sure to work
brilliantly.
The only thing standing in her way is trying to convince
Cross—her best friend’s brother—to go along with it.
Lord Crossby, Cross to those who know him well, knows that
Essie’s plan is not a good idea.
Because Essie doesn’t know, is that he’s been in love with
her for years. He refuses to leave this second chance left to fate. He lost her
once, and plans to never lose her again.
So, knowing he’ll risk his heart, he agrees to play along
with her disastrous plan. Silently vowing, that though Essie might be
pretending…he isn’t, and this time he’s playing for keeps.
The Devil Duke Takes A Bride – Rachel Van Dyken
Who said being bad wasn’t oh so good?
Benedict Devlyn, Duke of Banbury, has one thing on his mind
and it isn’t marriage. But things take a turn for the worse when his menacing
aunt throws a hitch in his plans to remain the most sinful and talked about man
in the ton. After all, a man cannot keep the reputation of being The Devil Duke
when he is leg-shackled to some simpering spinster.
But his aunt, bless her heart, thinks she’s dying, and
believes her nephew’s behavior is the only thing standing in the way between
her entrance to heaven or hell. So she very lovingly and selflessly sets him
up. With his childhood nemesis.
A young woman who, though she claims it was an accident, has
nearly killed him thrice through her lack of grace and manners. It matters not
that the minute he sets eyes on her at the Christmas ball, his blood boils with
lust. He refuses to allow himself to fall prey to his aunt’s ministrations.
That is, until he is compromised and stuck in an engagement
to a girl who claims she’d rather jump from a moving carriage than marry him.
Funny thing that, for the very minute she says no, he finds his heart very much
wants to say yes. When she doesn’t leap at the chance to marry him, he sets
about to not only prove that he’s worthy of her favor, but also worthy of her
heart.
A Winter Wish Blurb – Nadine Millard
Mariah Bolton is as headstrong as she is clever, as
strong-willed as she is beautiful. She enjoys her life and, apart from a rather
snobbish mama, she is happy with her lot.
Imagine her consternation then when her world is turned
upside down by the brooding and aloof Mr. Brandon Haverton!
Mariah and Brandon are forced to endure each other’s company
more than either wants to when a snowstorm traps them in the same house.
They argue, they bang heads and they drive each other
insane.
But something precious is blooming beneath the surface of
all that ice. Something neither looks for but both need.
Can love melt the snow around Brandon’s cold heart?
Can Mariah be brave enough to take a leap of faith?
And can a Winter Wish help bring two souls together forever?

Rachel Van Dyken is the New York Times, Wall Street Journal, and USA Today Bestselling author of regency and contemporary romances. When she’s not writing you can find her drinking coffee at Starbucks and plotting her next book while watching The Bachelor.
She keeps her home in Idaho with her Husband and their snoring Boxer, Sir Winston Churchill. She loves to hear from readers! You can follow her writing journey at www.rachelvandykenauthor.com

NEWSLETTER   FACEBOOK   TWITTER  GOODREADS  AMAZON AUTHOR PAGE
Nadine Millard:
Nadine hails from Dublin, Ireland though she now lives in a
quiet town in County Laois. When she’s not writing her own books, she’s reading
them. A lot!
She has three beautiful children, a pretty awesome husband
and a seriously fluffy dog!
Her favourite thing to do to escape the cheerful chaos of
her life is to read, drink coffee and wine and eat far more chocolate than she
should.WEBSITE
Kristin Vayden:
Kristin’s inspiration for the romance she writes comes from
her tall, dark and handsome husband with killer blue eyes. With five children
to chase, she is never at a loss for someone to kiss, something to cook or some
mess to clean but she loves every moment of it! She loves to make soap,
sauerkraut, sourdough bread and gluten free muffins. Life is full of blessings
and she praises God for the blessed and abundant life He’s given her.WEBSITE
Kelly Martin:
Kelly Martin is the bestselling author of contemporary,
historical, fairy tale, and YA romance. She has been married for over ten years
and has three rowdy, angelic daughters. When Kelly isn’t writing, she loves
watching YouTube and drinking white chocolate mochas.WEBSITE